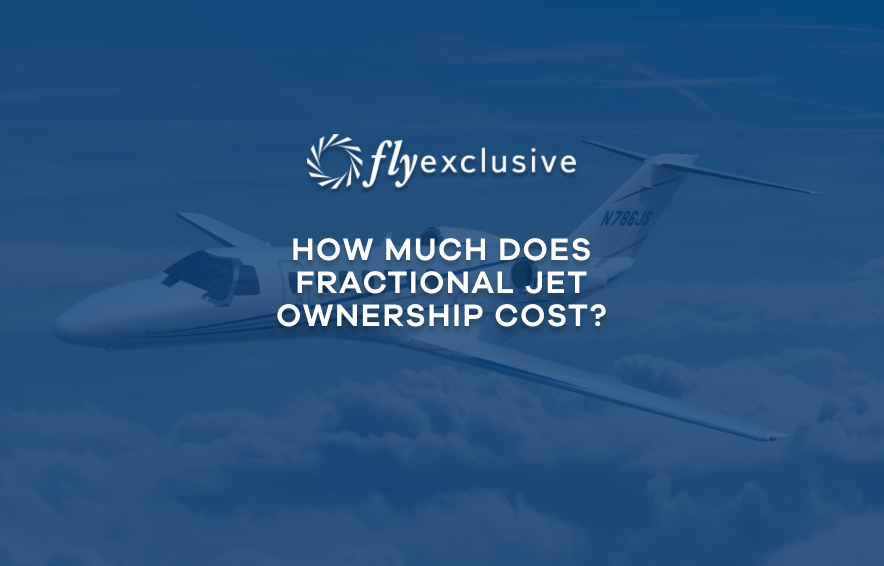 How Much Does Fractional Ownership Cost?

Are you wondering how much does private jet fractional ownership cost? flyExclusive's Fractional jet ownership allows those looking to own their own private jet to achieve their dream with a smaller barrier to entry.

The love for flying has been ingrained in the American way of life since its inception with the Wright Brothers. Since then, flying has become a modern mode of transport that is increasingly becoming the norm. With commercial airlines being filled to the brim with passengers, private travel has taken the spotlight with its simplicity, customization, and dependability, making the match of chartering flights the new challenge. However, flying private to your next destination aboard your own private jet has since become even more attainable with the introduction of flyExclusive Fractional jet ownership. This modern-day model allows those looking to own their own private jet to achieve their dream with a smaller barrier to entry.

In most cases, private jet ownership comes with steep upfront costs. Whether that is the cost of purchasing the aircraft itself or any hidden costs that many overlook. On average purchasing a new aircraft outright can cost between 2 and 500 million dollars. However, with fractional jet ownership that cost is significantly lowered. Rather than paying for the price of the aircraft itself, owners pay for their expected amount of hours reserving the jet.

Private jet ownership, much like regular vehicle ownership comes with a variety of recurring costs. These costs include items such as regular maintenance, property tax, and insurance. While these costs vary, the insurance alone can come at an approximate cost of $47,000 per year. These costs are then coupled with private jet ownership-specific costs including hangar costs and crew costs, which further add to the expense experienced by the owner. Using fractional jet ownership reduces your overall out-of-pocket by providing you with those services as part of the ownership process. Furthermore, with fractional jet ownership, any aircraft regulatory dues and costs are handled within the predestined package chosen.

The last phase of private jet ownership costs comes at the end of the ownership cycle itself. This is reflected in any sell-off costs from upgrading the aircraft. As owners only have access to their own private aircraft, making the change to another aircraft would require either buying a secondary option or selling off their aircraft to fund the purchase of the new jet. This process can lead to costs including, seller fees, taxes, and an overall potential loss on the initial investment. However, with fractional jet ownership, owners have the ability to pick and choose between various aircraft within the fleet to ensure they fly with the right option every time. This means having full access to a fleet of aircraft without the worries of costs incurred selling and acquiring another jet.

If you are looking to join the world of private jet ownership then let flyExclusive make your dream a reality. At flyExclusive we offer a variety of flight time options simply designed to suit your budget and travel needs. Our luxurious Citation fleet provides you with 85+ professionally maintained aircraft when you need them. Our revolutionary fractional jet ownership model allows you to feel like an owner without worrying about all the known and hidden costs of ownership. Visit our website today to learn more about our fractional jet ownership options.