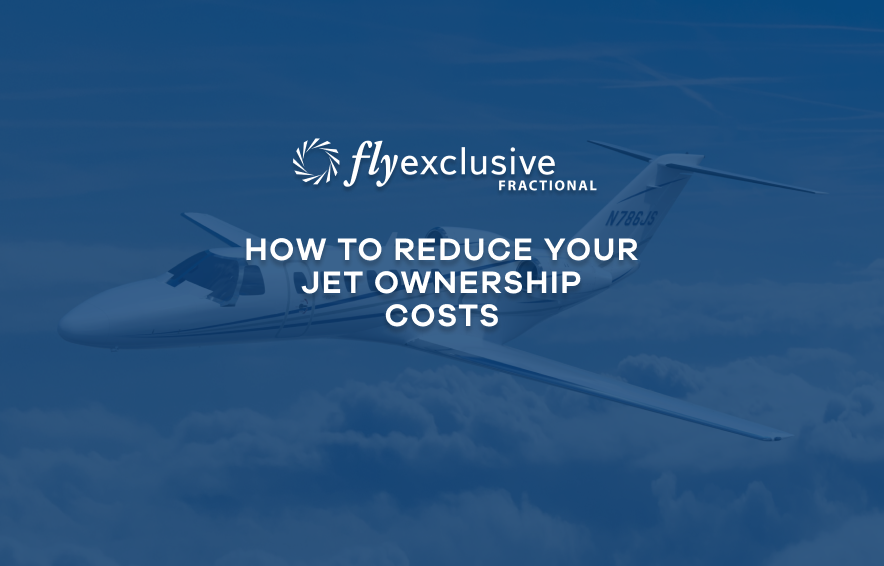 How to Reduce Your Jet Ownership Costs

With fractional jet ownership through flyExclusive, you maintain the control that is synonymous with jet ownership while simultaneously avoiding many of the costs that are added stressors and strains to full-time owners.

Jet ownership has many factors that can influence the overall cost that you incur. These costs can be broken down into two principle categories, fixed and variable costs. In an attempt to help mitigate these costs, flyExclusive has introduced fractional plane ownership. Fractional plane ownership is a relatively new and innovative concept designed to reduce the overall cost of your jet ownership by operating similarly to a timeshare, where you pay only for the portion of the aircraft that you plan on using. However, even with fractional jet ownership, it is important to understand the costs that are associated with jet ownership, so that you can go into your private jet purchase with the utmost confidence in your decision.

With full ownership of a jet, some costs are unavoidable. These costs mostly focus on staffing and managing your aircraft. With a private jet, you need to pay for your flight crew and their training to ensure that they are properly equipped to take care of you and your passengers during your flight. You also will have to pay a management fee as well as a fee to ensure that your aircraft is taken care of and properly stored while not in use. Additionally, you will have to ensure your aircraft makes it legal to fly, which, with top-end insurance, can be half a million dollars annually. All of these costs are on top of the costs of initially purchasing the private jet in the first place.

Variable costs end up being very similar to any other vehicle that you may own. These can feature situations such as parts or maintenance. You have no real control over when a part fails or when maintenance is necessary on your engines, interior, or another aircraft component. You also have to pay for operating components, such as oil, that keep your aircraft operating smoothly. Additionally, each time you travel, you will have to compensate your pilots and flight crew as well as pay for the fuel to travel to your desired destination. These costs stack on top of each other and can accrue to large values extremely quickly.

Are these costs avoidable?

Fractional plane ownership allows you to avoid many of the costs that are directly related to owning your own aircraft. Fractional ownership through flyExclusive will mitigate the initial costs of purchasing the aircraft, as you are able to pay for only the estimated amount of flight hours you will use throughout the year. Additionally, with flyExclusive’s MRO facility, maintenance and cleaning will no longer be a cost concern. flyExclusive also employs a highly skilled team of pilots and flight attendants that will make sure that your flight is up to standard without costing you extra.